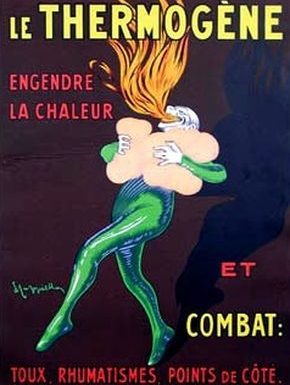 I am reacting to an article on Thermogène© published by Retronews to briefly discuss a particular sensation which is not often highlighted, although it has its raison d’être in cosmetology: skin that heats up.

Thermogène was a preparation developed in Belgium, in the province of Brabant, in 1896. Brussels-based pharmacist Charles Vandenbroeck’s invention was produced in a cellulose factory in Gastuche and marketed all over the world in a small red pack. It came with specific communication: the thermophilic Pierrot. According to its manufacturer, Thermogène was “high quality cotton” to which were applied the actives of an exotic plant “using specific processes” to obtain revulsive properties. As its name suggests, Thermogène generated heat and cured a surprisingly wide range of ailments like “coughs, rheumatism, stitches, and lumbagos”, and all this overnight!

One would have been very stupid not to get this, since it was reported that “pains believed incurable disappeared in one night, thanks to this marvellous piece of cotton, suitably applied”. It came as a cotton pad tinted with eosin, which gave it its red colour, and perfumed with Peru balsam and sandalwood. Most importantly, the pad was soaked in Capsicum frutescen, varieties of which are better known as Tabasco or piri-piri. It was suggested to treat a wide range of pains and ailments. But World War Two took Thermogène and its piri-piri breastplate and thermophilic Pierrot away.

It was actually a light form of less aggressive poultice inspired by some dermatological desensitization treatments or atopic dermatitis treatments with mustard flour. The brand no longer exists, but a similar product can be found under the name Ouate Thermogène©.

Therefore, it was not a cosmetic product as described by today’s regulations. So what does this have to do with cosmetics? Well, simply put, a few cosmetics manufacturers more or less consciously adopted its mode of action. The aim was obviously no longer to heal, but to generate a particular effect on the skin, a warm effect. The principle was to use this mode of action every time you wanted to stimulate peripheral microcirculation. So, the concept was based on the stimulation of peripheral microcirculation with substances with rubefacient and vasodilatory properties.

In the forefront of this were a series of esters of nicotinic acid, a well-known vasodilator. In addition, there was a vitamin, vitamin B3, so no need to worry, although in the form of esters, this molecule acquires significantly different properties and becomes rubefacient. There was also capsaicin, extracts of chillies, peppers or spices with rubefacient properties, and of course, essential oils containing them. These substances more or less worked the same way. Heat receptors (TRPV1) served as a “molecular thermometer”. Molecules such as capsaicin, piperidine or eugenol bound to the receptors and triggered the opening of ion channels, which generated a nervous message. This resulted in a warm effect. The feeling of warmth came without a real temperature increase. Does this mean these substances could be described as neurocosmetics? At the time they were used, this notion had not emerged yet. But we can ask the question now.

These characteristics are often associated with a more or less irritant trait: the dosage of these substances is particularly tricky. And it gets more complex with the individual dimension: irritability varies from one individual to another, making the exercise even more difficult. Nowadays, the development of this type of product must be done in close collaboration with a toxicological expert: the use of molecules which can lead to erythema is not a trivial matter.

The products to which this principle was applied include:

Besides adipogenesis regulation, the stimulation of peripheral microcirculation was long considered a useful complementary model of action. As a result, in the 1990s, there were proposals for slimming creams with a heating function. The effect was usually achieved by using conventional rubefacient ingredients. The heating was associated with an increase in lipolytic actives, which also helped visualize the application area and generate a sensory effect.

Here is an example of formulation.

In 2022, some of these products were still in brands’ catalogues, such as this one.

In the hair care category, it was long believed that an effect on peripheral microcirculation could also have a complementary effect on the irrigation of the root, and consequently on products that delayed hair loss or offered partial regrowth. These were less widely used. However, there have been some fairly recent developments in this area, as shown by this patent. Specific literature on these applications also exists, such as this pretty recent study (2020) about the use of Capsicum extracts in hair products.

Products to provide a volume effect on the lips

Peripheral microcirculation is also used for products with claims related to a lip volumizing effect. Indeed, by taking advantage of the contractile nature of lips, circulation stimulation can have an effect on the volume of lips. This is how a common practice, which consists in pinching one’s lips, causes a rush of blood at the end of the pinch with an immediate effect on the lip colour and volume. However, the dosage of rubefacient ingredients remains very tricky, so it is preferable to use plant extracts with less marked an effect, as in this example.

And there are even more recent products.

These are not to be confused with massage or muscle products, although the concept of muscle oil did exist at some point, before it disappeared. The concept and mode of action was not the same. Similarly, recent advances in understanding the effect of microcirculation on skin tropism follow a different logic. Still, a few formulations with a “healthy glow” effect were developed following this approach.

This is how this very old product called Thermogène was probably very deliberately meant to impact the current cosmetics practices.

Thank you for reading.

Non-2-enal is an unsaturated aldehyde. It is a colorless liquid largely responsible for the flavor …

Continue Reading about The “aging odor” or nonenal effect →