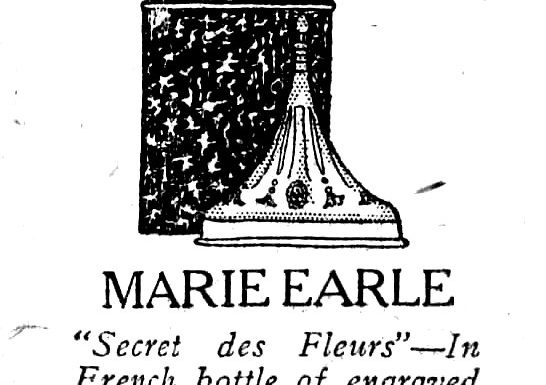 It is always interesting to discover brands’ histories, although sometimes, it can be as tricky to work on as a police case. Indeed, many brands have disappeared without leaving a trace, and Marie Earle is no exception. Let’s take a look back at this saga.

I took interest in this subject thanks to James Bennett, who did an awesome job with many brands, most of which American, but not only. His website features a few examples. We had actually drawn inspiration from his work to complete the Barbara Gould saga. Recently, he found information about the lost brand Marie Earle – at least he thought it was lost –, so he asked me about it. That is how I discovered it was present in several countries, including France, for over 100 years.

The history of Marie Earle is somewhat similar to that of Barbara Gould. It was created by a woman named Janet Juanita Bastable, who was born in Ireland in 1852. After a most extraordinary story punctuated by a name change, a wedding, and other tribulations, she created the brand Marie Earle. For those interested, you can read about the whole journey of this person, mother and daughter, in James Bennett’s excellent post.

She and her daughter took their first steps in the beauty industry in the early 20th century. Since some of their relatives were doctors, the Marie Earle adventure started with an emerging technique: galvanic currents. But the origin of the brand’s name remains unknown: maybe the need to change names, the dream to become a Countess? They started in England, and in 1909, they opened a beauty salon in Paris located 279 Rue Saint Honoré – one of the best venues in the French capital. In a book, Bastable wrote: “… My daughter and I, we can no longer resist the countless requests we receive from chic, smart Parisian women, so we are opening an English salon dedicated to beauty hygiene culture in this adorable, artistic Paris quarter which, due to its magnetic influence, appeals to prominent scholars.”

Their reputation quickly grew and many publications were released: the following chart shows the brand enjoyed a wide audience up until World War Two. Their approach was also detailed, as can be seen in this extract from the Femina issue of January 1909 (@retronews):

The initial aesthetic treatments consisted in using electric currents and electrolysis to treat concerns like unwanted hairs, birth marks, scars, etc. Janet had developed a series of techniques based on these approaches already known – or even classified – in the late 19th century. Also used by other major brands, these electrostimulation techniques became common again in the 21st century.

In the meantime, a limited range of cosmetics was released. As usual, there was a scientific or medical reference, since it was developed by her uncle, Herbert Bastable, a skin specialist with an uncertain scientific background. Gradually, the range got broader, so the Paris beauty salon could offer products like L’Elixir, the Perfection series including the cream, the cucumber-based emulsion, and the toner, or a peculiar mask with straps evocative of the light devices currently on the market. A few makeup products completed it all. In 1928, Coty took hold of Marie Earle, similarly to what Bourjois did with Barbara Gould. The brand’s founder retreated in Europe, where she died in 1935.

The range was entirely reviewed, made broader, and completed with accessories. The Parisian salon moved Rue de la Paix. Coty used this new acquisition to market a perfume called Rallet, and a more comprehensive makeup range was developed. As far as salon techniques were concerned, Marie Earle stood out by offering a skin-stroking technique in opposition to what was known as gentle tapping. The brand’s comprehensive technique was called Aralinn. Its interest in tapping was confirmed much later. Following the Food, Drug and Cosmetics Act of 1938, the range and products were modified: some terms were banned, which partly downgraded the marketing pitch.

Then, World War Two marked the end of the brand’s presence in France, although the story continued in the US, where new products were launched.

In 1954, Coty decided to combine Marie Earle, Lily Daché, and Lucien Lelong to found a new company, General Beauty Products Inc. Lily Daché, a stylist, became the President. That is also when the brand was one of the first to introduce a particular product in the US: a cream formulated with royal jelly, Queen Bee Cream, which was completed with other products.

In the late 1950s, Coty started to struggle financially: all brands were sold to Mary Chess in 1960, and the group was sold to Pfizer in 1963. The Marie Earle brand was then purchased by various owners, including Nestlé Lemur and Hichens Cpy, before it disappeared.

It has just reappeared in France with a range of neurocosmetics!