As a professional, like me, you must have met people who talked to you about “nourishing creams”. It is quite a common, even ordinary term. But every time you need to describe what it refers to, maybe you are a bit embarrassed – like me: what is it? What should we feed the skin with? Does it actually eat? What are skin foods?

And yet, many products are claimed to be nourishing. As a matter of fact, the 2019 theme of the U’Cos innovation contest chosen by a group of cosmetics experts – insiders – was “cosmetofood”. But COVID-19 prevented anyone from solving this mystery, since the colloquium was cancelled – a shame. Maybe the debate will be resumed later. In the meantime, I felt like unveiling the introduction I had prepared for the occasion.U’COS 2020

Is it a new thing to try to act on beauty and appearance, on attractiveness, both from the inside and outside? Definitely not. People would like it to be, but it is actually very old: it is a long-standing dream of humanity. Men have endeavoured to eat specific things to change their physical appearance or play on attractiveness for a very long time:

Among all these examples, in her book Recueil des Secrets, Lady Louise Bourgeois (1563-1636), the French King’s midwife, provided formulation elements much similar to the ingredients used in nourishing creams. For example, she suggested a formula based on pig fat, fresh butter, and various other ingredients, like sage, hyssop, elder, and a pinch of hen droppings. The whole thing was to be cleverly warmed up, reduced, and then filtered and preserved. 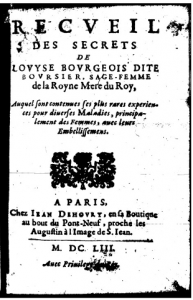 Her work received various criticism and crossed time until, in the late 19th century, many of the people who took interest in these issues, namely perfumers, but also chemists and physicians, pretended that creams “nourish[ed] the epidermis”, and even that the “epidermis [could] digest”. Soon, in the early 20th century, “day creams aimed to protect the face and night creams aimed to feed the skin and make it digest fats” emerged. Arthur Burrows, an English dermatologist, gave an “informed” definition of nourishing creams. To him, just like cosmetic products, which preceded them for centuries, they were beauty products used to beautify consumers who trusted them. Well, we will not go anywhere with this. He also said that “skin foods or nourishing, tissue, or lubricating creams exist[ed] under a hundred of different names: they aim[ed] to ‘feed’ skin and ‘make women feel beautiful’”… To him, these nourishing creams contained lanolin, lecithin, olive oil, or fish liver oil. As an example, one of the different specialties available at that time contained “Biocel”, an ingredient whose “loss in the skin could trigger the formation of wrinkles[1]”. It was presented as an embryo extract with “hemopoietic serum”! Skilfully dosed in the Tokalon cream, it helped get unhoped-for skin quality. Here is how it was described in the ads: “It is the only real dermal food ever found. It penetrates skin cells in depth and feeds your skin exactly where wrinkles start to form.” 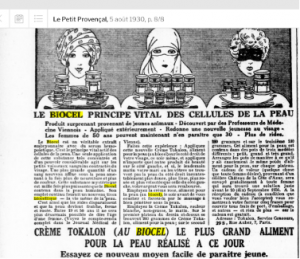 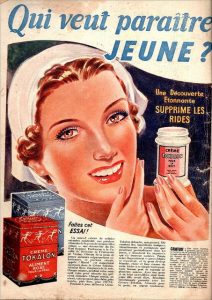 Based on current knowledge, these arguments cannot but sound misleading, but given the little knowledge at that time, they were still allowed.

These beliefs actually date back to an old assumption according to which sagging skin was due to a decline in subcutaneous fat. It led people to believe that the objective of skin foods was to prevent wrinkles, which “mar the smoothness and beauty of ever-so-nice a complexion”. This idea was completed with the postulate that using skin foods enhanced the skin’s “tonicity”, which suggested wrinkles were partly due to a “feebleness of the nervous system”. As a result, directly feeding the skin’s nerves with skin foods would revitalize and tone up the skin, but also reduce the appearance of wrinkles. It was the promise that food had a tonic effect on the skin, without being astringent. Early beauty books suggested that fat or vegetable oils applied to the skin easily penetrated tissues to replace lost fat. This way, the “well-nourished” skin would be less wrinkled and look younger. Raisin seed, avocado, turtle and cod liver oils were all considered skin foods, and lanolin (sheep wool fat) was thought to be especially efficient due to its presumed similarity with the skin’s sebum. As opposed to them, oils derived from petroleum products (Harry, 1940, p.53) were not believed to offer these properties.

This appealing idea led to the creation of a group of cosmetics called “skin foods”, which were also known as “tissue builders”, “tissue tonics”, and “tissue creams”, and ended up being simply defined as “nourishing creams”.

These products were available everywhere in the early 20th century. Contrary to vanishing or cold creams, there were no standard formulas for skin foods, because they were based on the function of “feeding”, i.e. based on ingredients supposed to “nourish” the skin. Such was the power of this term that it was applied to beauty products other than face creams, like soap and face powders. In addition, as the idea of “feeding the skin” made progress in the 20th century, other ingredients, such as plant extracts and vitamins, were also described as “nourishing”. Some brands made things even more confusing, as they claimed that muscle oils were also nourishing oils. Therefore, nourishing creams were formulas concentrated in fats known as “heavy” creams. A few American brands even suggested they could be used as foundation if they were mixed with powder. But they were usually applied at night, when used at home – which would give them time to “penetrate” and “feed” the skin. Is that when the night cream concept was born? Probably, but not for sure. This concept was later revisited, when it was shown that, since the skin had a circadian rhythm, it was logical to do things at particular times of day.

Still, regulatory issues emerged as regards these preparations. Incidents, like the trial which opposed the Globe Pharmaceutical brand to the American Administration, led to the 1938 Cosmetic Act being published in the US. In 1939, provisions were released against cosmetics suggested to have “drug-like” effects. The claims considered false or misleading by the FDA included “rejuvenating cream”, “nourishing cream”, “skin conditioner”, “skin food”, “skin tonic”, and “tissue cream”. If they happened to be true, the product claimed to offer these properties could be considered a drug. Skin Food, Tonic Food, Tissue Tonic, and other names with a similar meaning, which implied the skin was fed by using them, were no longer allowed. After the FDA statement, the expression “skin foods” disappeared from American cosmetic ads. But it remained used in other countries. For example, in France, in his 1933 Formulaire de la Parfumerie, René Cerbelaud described the formula of the American lanovaseline-based cream, which he called “American Skin Food”. However, he lists long series of cream that he does not organize under this classification. The term had been increasingly used in the French press starting from the 1900s, as shown in the analysis below. It reached a peak in the 1930s, then it naturally vanished during World War Two and never really came back. Other claims later emerged, some of which described the same products. 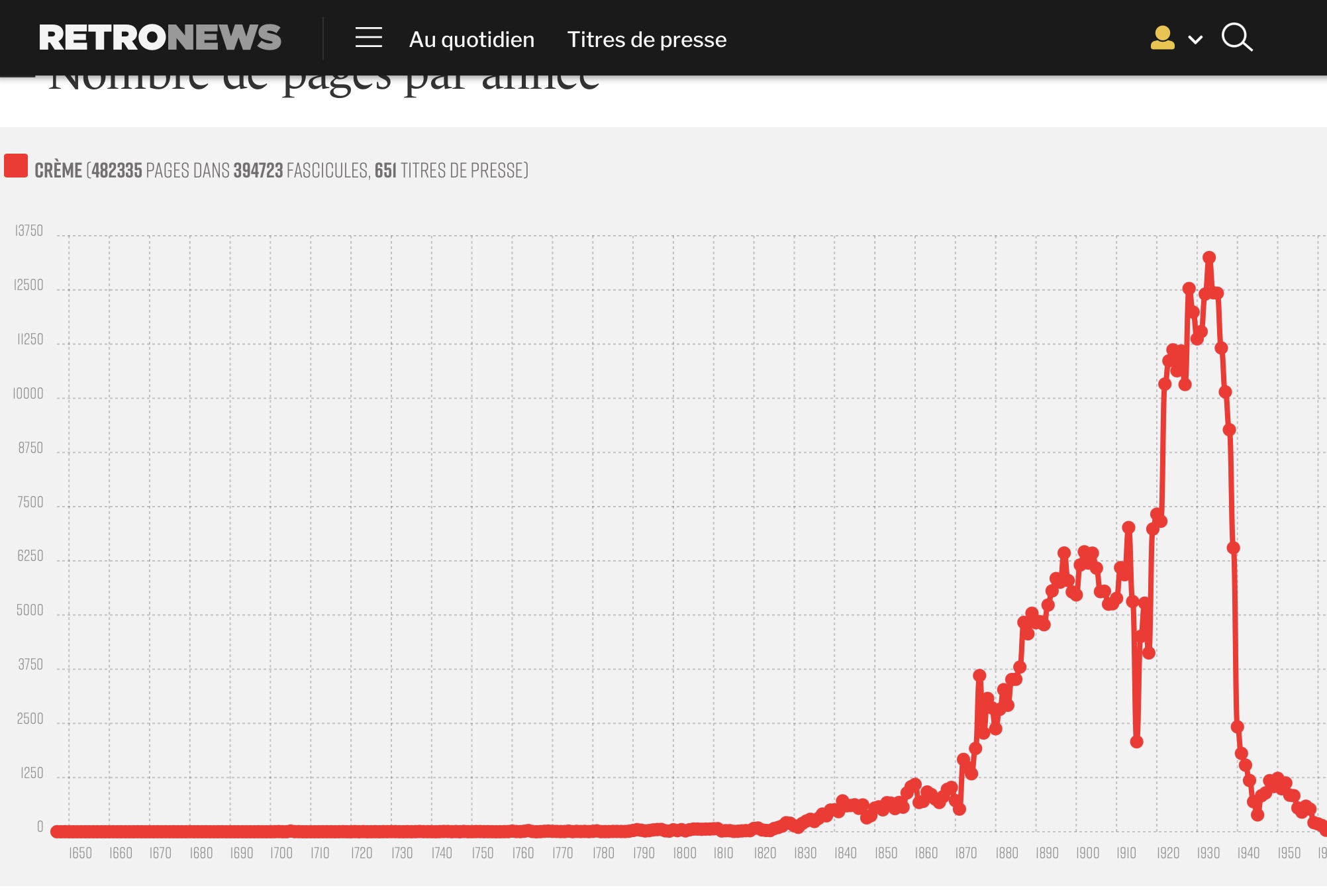 If this product class still existed in many countries, in both Europe and Asia, after 1938, American manufacturers simply rebadged skin food creams as “lubricating”, “emollient”, or “night” creams, and lanolin remained a favourite ingredient. Another tactic consisted in incorporating special ingredients into their products, like hormones, vitamins, or royal jelly, and in labelling them as such, promising that they would improve the skin’s look and feel and reduce signs of ageing. Most of these additives eventually lost ground to substances which acted on skin’s hydration, and this process led to the widespread adoption of moisturizers in the 1960s, when specially moisturizing substances were highlighted, such as NMFs (Natural Moisturizing Factors) and PCA (Pyrrolidone Carboxylic acid). This segmentation roughly lasted until the 1970s, and then 1980s, when the concept of “anti-ageing” products emerged. But the idea of a cream, lotion, or serum able to feed the skin never really died. Many cosmetic products were still promoted as being able to replace something in the skin which declined with age. One only has to look at the number of skincare products suggested to replace collagen, elastin, hyaluronic acid, ceramides, or some other age-diminishing component of the skin to be convinced. Some actives long flirted with this positioning, for example the so-called “superfoods”: hop, soya, rice, goji, algae, like spirulina, which, given their use as part of a reasoned diet, evoked the idea of nutrition, by extension. One can also mention ingredients known for being nourishing, like royal jelly, and even honey. Specific developments like CosmétolégumesÒ were also in line with this trend – this particular product is described in depth in a separate article.

That’s all there is to say about the mystery of “nourishing creams”, which, if it is not solved, is now historically and logically documented. If we have a closer look at it, it is clear that it was much more than a punctual positioning. Cold creams, vanishing creams, stearate creams, muscle creams… In their own way, each of these products represents significant steps towards modernity. If brands often proved hesitant when knowledge was not sufficient, they were very creative when it came to offering solutions that seemed satisfactory to them. What about today? Things are still confusing. Here is what an expert in cosmetology recently answered me when I raised this issue: “It is true that the ‘nourishing’ claim is still widespread… even if it does not mean anything. Women like it a lot… they often ask ‘do you have a nourishing cream?’ And they are usually not contradicted. Instead, they are suggested a reference… Business as usual!!!!” Things are definitely confusing. When making a request in a database with the term “nourishing”, I obtained no less than 840 references on the French market. Few names featured the term “nourishing cream”, but it was used more often than expected in product presentations, which just shows the concept is still alive, although its meaning has changed. 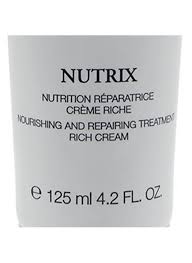 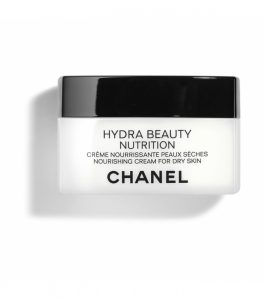 It is also preserved by the renewed interest in products claimed to have beneficial effects on the skin by ingestion. This is called Cosmetofood or Nutricosmetics. It is true that the effects of these products are increasingly objectified – the claims long remained anecdotal. The flagship substance in these ranges is collagen to be ingested. But although more and more reliable experimental evidence is provided, the concept remains to be officially scientifically validated. So far, the multiple attempts to establish it have failed.

Even if certain concepts may seem anecdotal, we should not even smile about them: we have not made much progress on certain aspects! Who would have thought that one day, we would need to add bacteria to products we fought to make sterile for more than 25 years!

Lets have a look to : cosmetics and skin