Cosmetic products can give as much pleasure as a caress. This notion emerged a few years ago, but, interestingly, it reappeared as a topical issue at the In-Cosmetics 2019 show.

It is an issue that is more or less related to neurocosmetics. This approach appeared in the 1990s following a series of advances which helped specify certain aspects of skin physiology. First, observations were made, confirming the presence of very superficial nerve terminations in the epidermis. This discovery questioned older hypotheses according to which the epidermis was not innervated, despite the old French expression “avoir les nerfs à fleur de peau” (“nerves on edge”, but literally, “nerves on the edge of the skin”). Intraepidermal nerve fibres interact directly or indirectly with skin cells and cells in the endocrine, lymphatic, and immune systems.

These findings resulted in the definition of a neuro-immuno-cutaneous-endocrine network (SNEIC in French for Systeme Neuro-endocrino-immuno-cutané). To work properly, this system requires a common language composed of molecules of different natures: neuromediators, cytokines, and growth factors. These molecules are synthesized and released by both skin cells and intra-epidermal nerve terminations. They act on themselves and on neighbouring cells expressing their receptors. As a result, skin neurobiology concepts started to emerge and several authors suggested a series of definitions, including that of NICE, to support to their activities. It was in the 1990s. Few people had heard of this work, and the notion of neuromediators was not much developed back then. So, this new concept soon caught people’s attention. First, those who were interested took into account the interactions between substances and neuromediators. In other words, does the skin exhibit certain characteristics via neuromediators? And if it does, can specific substances – and products containing them – interact with these mechanisms?

Studies on the interactions between nerves, keratinocytes and others resulted in observations that helped specify conditions related to neurogenic skins, like the sensitive skin syndrome. Also, several more or less well-established ideas emerged from the discovery of the effect of certain substances on the release of other substances interfering with the pool of neuromediators: substance P or neuropeptide Y antagonists, for example. All this led to the development of products for sensitive skins.

Other substances were put forward as part of this wave of studies on the secretory effects of the epidermis. Endorphins were part of the most widely commented. The hypothesis was not based on whether nerves were involved or not, but more generally on the fact that the secretory properties of keratinocytes – a rather peripheral idea – involved interactions with the skin’s nervous system. Back then, these endorphins were presented as wellness and “happy sensations” molecules. Their contrary was stress. And of course, creative teams immediately started working on this subject. Very quickly, some of them highlighted a stress-relieving effect triggered by substances that help the skin make antistress molecules. This concept was regularly polluted by an old belief according to which the brain and the skin, since they share the same embryonic origin, might have privileged relationships. This idea, both science-fiction and a physiological reality, although the nervous system exhibits a certain continuity from sensorial sensors to our analyzing tool, the brain, reinforced our initial statement that cosmetic products generate pleasure. It was also comforted by neuroscience observations showing that using cosmetics can activate the reward channel and produce a transitory euphoric effect.

As a consequence, a few researchers focused on discovering substances that locally produced endorphins. The first actives were unveiled in the late 1990s, and as usual, the first products soon followed. And yet, contrary to the usual process consisting in looking for new substances, the first actives included well-known products as the best candidates. Peptides soon appeared as the solution: as they were working on substances with analgesic properties, based on a publication by the Kyoto University, Sederma’s team showed particular oligopeptides could offer similar properties. Karl Lintner tells about the approach they adopted in this most interesting article. So, a first specialty, Sensicalmine, was developed by Sederma for similar, but still rather different purposes. Based on the same peptide, complementary work including reformulation showed that this peptide could exhibit the expected properties. It was called NATAH and became the base molecule in Calmosensine, an active dedicated to this property. Effects on the production of pro-endorphins were identified during the process. Calmosensine contains one of the first cosmetic actives acting as a softness, comfort, and relaxation messenger. This active modulates unpleasant sensations and acts on muscular relaxation via neurotransmitters (beta-endorphins, CGRP) –

A few of the first finished products were developed by selective distribution brands, like Guerlain. In 2004, the company launched a series of products called Happylogy: Issima Happylogy

If this concept had almost been forgotten, it recently caught some people’s attention, as can be seen with these two patents:

Since then, actives developed by ingredient suppliers have resulted in renewed interest in this positioning. Here is a short, non-exhaustive, non-judgmental list:

Ultimately, a few brands also jumped on this bandwagon, like this one – but no doubt there are others and/or others will soon emerge: Happycosmetics

This trend is particularly interesting in the cosmetics world, but it should not be presented as something completely new – more like the continuum of the search for quality that started many years ago and helps better understand how the skin, such a complex organ, works.

Thank you to everyone who helped me write this story. 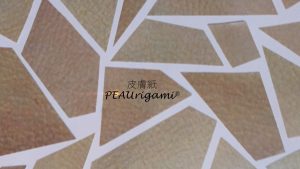 Our skin is our own paper ! Origami is the art of folding paper. The Skin and Origami share many …

Have you known Barbara Gould? The brand still exists, but it lost quite a lot of its prestige, after …

Many hypotheses illustrate the business life in our trades. One of them leads to the classification …