After gemmology, let’s take another look at “gemmology”, or rather “lithotherapy”!! Indeed, if these two terms are identical, they do describe very different approaches. They are derived from a Latin word, gemma, which means both “bud” and “precious stone”. However, gemmology uses fresh embryonic tissues from plants, trees, and bushes – buds –, young sprouts, or rootlets, while lithotherapy involves “gemstones”: minerals used as ornaments for their beauty and rarity. Today, it is the second approach we are interested in – the one based on precious stones and/or materials derived from them. 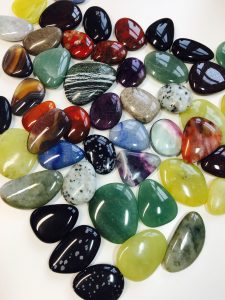 Gemstones or precious stones actually refer to rock types. They are commonly found in the continental crust, except for diamonds and peridots, which form in the Earth’s mantle. Their compositions vary according to different criteria, from pure carbon to varieties of silica derivatives. These different types include more or less mineral elements like trace elements, which means they are found in low concentrations. Now, the gemstones belonging to the semiprecious stone category formed in the Earth’s depths between three billion and tens of millions of years ago. The oldest object identified so far is a tiny fragment of zircon discovered in Western Australia: it is 4.4 billion years old. Semiprecious stones form in three different types of rocks in the Earth’s ground, in most varied environments:

The place where they are found is called an ore body. And when extraction works begin, the ore body becomes a “mine”. The most common process for extracting semiprecious stones is alluvial exploitation, which involves extraction from sedimentary deposits.

The four stones traditionally described as precious stones are diamond, ruby, sapphire, and emerald. But they do include many categories, like semiprecious stones, also known as fine stones. And if mineral gemstones are usually classified according to the stone type, the colour criterion can also be interesting, in particular in terms of composition. That is how you get the following classification:

The colour of a stone depends on the way it absorbs and releases light. There are several types of stones classified according to their response to light:

The colour perceived does not only depend on the stone’s light absorption, but also on its reflection, refraction, interference, or scattering when it comes in contact with a texture, an internal arrangement, or additions at the submicroscopic to millimetre scale.

How are these elements used?

These elements have been traditionally used in the jewellery industry.

But in what other fields can they be interesting? As is often the case, it is in human medicine that they were first found useful. Traditions, first: over time, almost all cultures involved the belief that stones were magical and could provide precious powers. Interest in stones emerged as soon as the Ancient times. Then, “lapidotherapy” appeared in the Middle Ages – it is now called lithotherapy or crystal healing. Derived from the contraction of lithos, for “stone”, and therapeia, for “recovery”, this approach is based on the idea that health disorders can be treated thanks to stone properties. Many traces of the use of stones in different forms have been identified, whether it be in Ancient Egypt, traditional Chinese medicine, or a whole bunch of other civilizations which have disappeared since then. Stones were taken in the form of elixirs, powder, or they were worn. Prehistoric peoples thought minerals could enhance strength and fertility, while fighting against evil spirits.

In 1644, Anselme Boèce published a book entitled The Perfect Jeweller or History of Stones, where he described the curative power of stones, among others. In 1748, Mr Lemery’s drug encyclopaedia dealt with stones’ virtues. And in 1869, Mr. Guibourt, Professor at Paris’s Faculty of Pharmacy, published The History of Uncomplicated Drugs, whose first volume was dedicated to minerals. 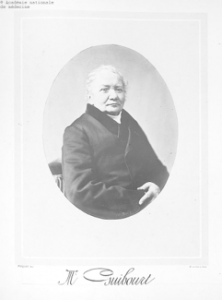 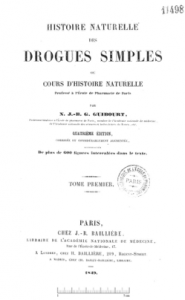 Lithotherapy became an official subdomain of homeopathy in France in 1965. This holistic approach to health considers individuals as a whole. It highlights the energy of stones and is claimed to have the power of providing the body with both balance and harmony. It requires the energy of stones to maintain a balance between our mental state, our body and our spirit. According to this science, stones represent cosmic and telluric energies. At times considered a pseudo-science, these very old practices did last and were widely used for wellness and balance research purposes.

Lithotherapy is based on the following principles: 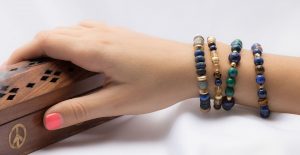 Certain trace elements play a well-known biological role on the skin: copper, manganese, selenium, silicon, and zinc. If they are necessary for its integrity and elasticity, they can also be involved in ageing or pathological processes, like inflammation. Given their roles on our defence systems (in particular selenium, copper and zinc), trace elements are key players in our skin’s health. Selenium plays a role in antioxidant processes. Glutathione-peroxidase, a selenium enzyme, helps minimize the harmful effects of oxidant stress related to an excess of free radicals. Copper is also a key trace element for the skin in several ways. It acts both on its integrity, in particular that of collagen, and on protective systems (SOD or superoxide-dismutase). In addition, it plays an active role on tyrosinase, which contributes to synthesizing melanin precursors, whose photoprotective role is essential. Manganese is one of the main players in the integrity of collagen and protective systems. Silicon is also involved in the maturation of native collagen bundles. And zinc is traditionally used for its healing virtues. Its contribution to synthesizing proteins, in particular collagen, is essential to maintaining the skin’s integrity. Also, it is known for taking part in treating the sebaceous gland inflammatory dysfunction. Many studies highlight its key role in modulating inflammation, especially in the skin, as well as its potential in healing processes.

Several product ranges were developed based on its principle. And although they cannot all be mentioned, one of them had rather short a living, but perfectly illustrates this positioning. As seems rather logical, it was designed by a jewelry brand, Bulgari, and consisted of a series of products based on precious stones. It was in the early 2000s. 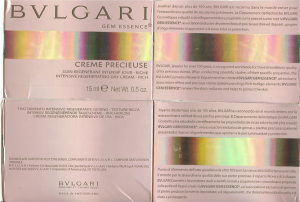 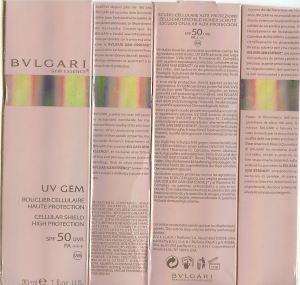 More recently, this concept and positioning inspired a brand called Gemology. Developed by Chrystelle Lannoy with the help of expert Jean-Claude Bozou, who had already offered cosmetics interesting contributions (he is the founder of Laboratoire Bomann, a cosmetic ingredient supplier until 2008), the brand imagined cosmetic specialties in line with this positioning.

And there are many other cosmetic specialties based on this practice.

These cosmetic products can only emerge because specific ingredients are available on the market. The first companies tempted by this positioning included Laboratoire BOMANN, whose range ended in Givaudan’s catalogue following their purchase.

Likewise, many years ago, Gattefossé launched a range of precious stone extracts in the form of liquid solutions obtained by digestion of these minerals: Olivine, Hematite, Rhodo’Låte, Brochure Zincite

So here is a way to make skin bright and shiny.

Thank you to those who helped me prepare this contribution, and in particular the companies Givaudan and Gattefossé as well as Jean Claude Bozou.