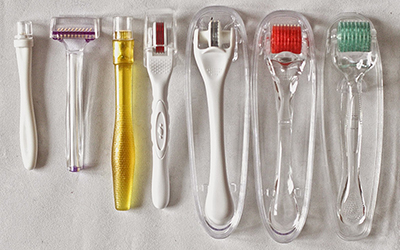 Beauty accessories have always occupied a special place in beauty routines. And today, as cosmetics are getting increasingly more accessorized, people are more than ever interested in them. Some of them even make up the functional part of products. Within this context, rollers represent a particular category. Of course, I am not talking about hair rollers used for hair styling, although they could actually belong to the beauty accessory category, but about the various devices that treat the skin to provide a specific result. If they are very old, rollers are regularly put back in the spotlight. There are different types of rollers, involving different operation principles. Today, the Microneedling and dermaroller.

These techniques are both derived from mesotherapy and the development of devices in this field of application. Mesotherapy is a medical technique developed in 1952 by Doctor Michel Pistor (1924-2003). It is based on the repeated administration of low doses of allopathic medicines (all drugs used in general medicine, except for corticoids) or homeopathic medicines, on or in the skin, where the trouble and/or pain are felt. Scientists found written work dating back to as early as 3600 BC, which describe the use of balms and liniments applied using the multi-puncture technique, in China and India, in particular, but also in Egypt. Acupuncturists know the “plum-blossom needle technique” very well: the plum-blossom needle is a small instrument with a round head at the tip of a metal handle, from which emerge six to eight points, and which is used to relieve congested, painful areas, by quickly tapping them. 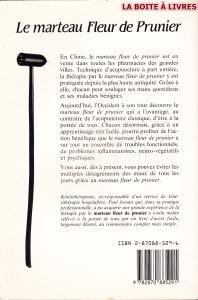 A bit of serendipity: Doctor Michel Pistor worked as a general practitioner in a northern France village. Among his patients, there was the village’s shoe-repairer, who consulted him for asthma, but who was also hard of hearing. At that time (1952), asthma crises were treated with an intravenous injection of procaine. At some point of the treatment, the shoe-repairer told his doctor that, if his asthma had hardly improved with the injections, his hearing was actually much better: he could now hear the clock tick. Doctor Pistor started to administer intradermal, subcutaneous procaine injections all around his patient’s ears, and in a few sessions, he was no longer deaf at all. Unsurprisingly, all deaf people in the surrounding villages came to see Dr Michel Pistor, hoping to be cured. But it never worked. The shoe-repairer’s trouble was vascular, contrary to the other patients’: he had been cured thanks to procaine’s vasodilatory effect. However, the other patients reported improvements in terms of headaches and reduced migraine crises: that is how mesotherapy was born and won acclaim.

As for microneedling, the first use recorded in the Western world seems to date back to 1905, in Germany. Ernst Kromayer, a renowned dermatologist, started using drills of different sizes mounted on a motorized, flexible cord set to treat scars, birth marks, and hyperpigmentation. In the 1920s, vets also successfully started using this method, at first on horses, then on all animals. 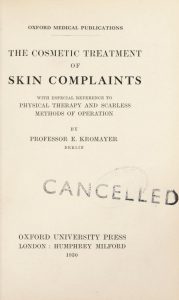 Then, in the 1950s, Kromayer’s work was rediscovered by Abner Kurtin, a dermatologist living in New York City. He modified the technique using stainless steel brushes, instead of drills. The experiment was then carried out again as part of the pioneer work on skin ageing led by Alexis Carrell, a French scientist who won the Peace Nobel Prize. In 1995, two of Carrell’s protégés in NYC described a new technique to treat scars and wrinkles with a hypodermal needle. But as soon as the 1980s, the studies performed by Canadian surgeon Dr Camirand to enhance the appearance of surgical scars after a lifting were a triggering factor. He used a simple tattooing machine for it. Then, in 1999, a German scientist, Horst Liebl, developed Dermaroller, a small plastic roller fitted with 200 microneedles. An assessment carried out by Dr M. Schwarz (plastic surgeon) and H. Laaff (scientist) in 2006 shows that microneedling significantly increases collagen fibers in the skin area treated: the skin thickens. This technique consists in microperforating the epidermis to enhance the penetration of the products applied on the skin surface. It was gradually documented and described as an efficient anti-ageing approach. Among others, micropunctures enhance skin collagen production. This mechanism of action is called “percutaneous collagen induction therapy (PCI) or “collagen induction therapy” (CIT). The Dermaroller device was gradually developed based on this approach.

The cosmetics industry eventually took interest in these techniques, especially when mediesthetics were developed and companies started using methods implemented in consulting rooms as part of anti-ageing procedures. The idea is to use less invasive devices which can destructure the stratum corneum to enhance the absorption of actives.

From a regulatory standpoint, there are still discussions going on, because some people consider it is a device intended to be applied on the skin in order to modify its appearance, which makes it compliant with cosmetics regulations, if safety of use is guaranteed, while others think it is an invasive treatment which should fall under the scope of a different regulatory framework. Well, let experts hold forth about it: this device has actually existed for several years, and it is regularly suggested as part of beauty routines, especially on e-shops.

Among the first companies to offer this device is Filorga. A pioneer in the field of innovation, this company will propose in 2010 the combination of a Dermaroller and a serum. The first version will focus on the face. This is the Mesotherapist which will be presented in the form of a Roller accompanied by a polyvitalisant solution prepared from the specialty of this company, the NCTF. This NCTF solution had already been shown to be effective in mesotherapy treatments. The roller has been specially designed not to be invasive and to allow safe use. 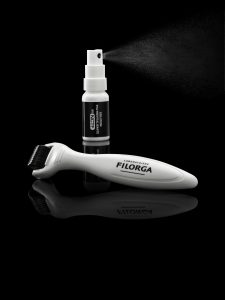 The second version was launched later (2012), with a modified application device in the form of a double roll, will address slimming products. In the same way as for the face, the roller was conceived to allow a total security so as not to be invasive. The roll was accompanied by a specific preparation, composed based on SVELTAM, developed initially by the Libragen company, since bought by Induchem then Givaudan, with which was associated the multi-purpose solution of the company FILORGA, the NCTF. 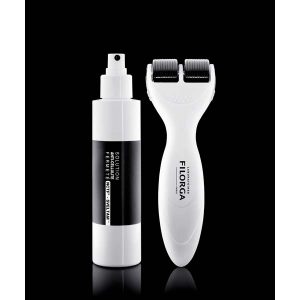 Since then, many specialties using the Dermaroller have been offered by multiple brands. The device is offered either as a “device” alone or in combination with products to boost their effectiveness. The fields of application are numerous, ranging from face products (anti-aging, scars) to body products (cellulite, stretch marks), through hair applications. It is currently primarily an institute device because current versions require some expertise in use. Some advise this device in combination with DIY products type (do it yourself), which we can only advise against. Indeed, the mastery of the utensil and its use with products requires adaptation studies which it is unreasonable to think that one could do them yourself.