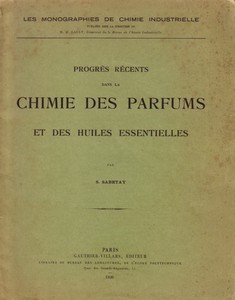 In our time, we could have called him “Monsieur Sébastien” to designate Mr. Sabetay, a great name in the cosmetics industry. A long career for one of the first “Doctor” of our field. François Laserson, René’s son with whom Sébastien Sabetay had partnered, made us friends to remind us of his career.

As far as Sébastien Sabetay is concerned, chemistry was much more than a job, it was a passion. Always enthusiastic, he dedicated his whole life to it.

After finishing his PhD in 1924, he started his career at the Pasteur Institute, in Paris, as an assistant to Professor Ernest Fourneau, Director of the Therapeutic Chemistry Laboratory. Initially, he worked on developing drugs, but then he turned to perfume chemistry and the synthesis of odorous compounds, upon his boss’s request.

In 1928, he became head of the Research Laboratory of Maison Houbigant, one of the most beautiful French perfumery companies at the time. In collaboration with the Pasteur Institute (Ernest Fourneau) and the Catholic Institute (Canon Léon Palfray), he developed an intense research activity: his laboratory discovered many odorous compounds, as well as new synthesis and analysis methods, while actively participating in important work on natural essences, a cutting-edge field back then. He published numerous articles, in particular in 1940, when he wrote a book on perfume chemistrywith his wife Hermine. Meanwhile, he provided counselling services for several other companies, like Dauphin, Chiris, Laserson…

In 1951, he partnered with René Laserson and helped the Laserson & Sabetay company specialize in cosmetics. He discovered many new raw materials for this booming industry, like squalane (Cosbiol®), a major advance at the time.

From 1950 to 1960, he was the editor of the journal Industries de la Parfumerie.

In 1967, he created the Académie d’Osmologie et de Dermologie, which was particularly active in the form of monthly meetings, until he died, in 1978.

When asked whether he had made a list of his countless activities, discoveries and publications, he used to answer: “those times are past, I’m only interested in the future!”

Mr Sabetay was simple and easily approachable, always ready to give without expecting anything in return, always paying attention to both little ones and adults. He communicated his joie de vivre and optimism and was called “gentilhomme de la chimie” (the gentleman of chemistry).