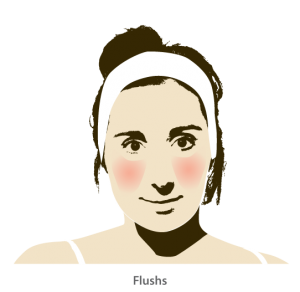 The birth of the Sensitive Skin concept in the 90s.

The notion of sensitive skin has always been a tricky issue for the cosmetics industry. Long mistaken for skin irritation or allergic skins, manifested by redness, desquamation, and blisters as a response to rather accurate stimuli, sensitive skins were long considered a recurring cosmetic complaint, without their symptoms being well described and understood. One of the main issues for the community was to find out whether they were cosmetic-dependent skins or, on the contrary, if they corresponded to skin pathologies at an early stage, but not related to the use of cosmetics. The 1990s marked a clear change in our understanding of this phenomenon and led to products specifically focused on this skin type. This evolution was made possible thanks to new research work in two different, new fields: skin innervation and clinical research on healthy skins.

Let’s look back in time

Clinical research in cosmetics started in the early 1990s, in particular thanks to the emergence of skin biometrology, which, combined with the observation of functional skin signs, helped describe healthy skins and the different skin signs and manifestations. This work helped make progress as regards the definition of skin normality, as Professor Louis Dubertet observed (1)

Many impact studies demonstrated that the prevalence of this skin type was quite high. In the case of sensitive skins, the approach was based on clinical manifestations of different types, like redness or more or less severe erythemas, but often sensorial ones, like itching, discomfort, stinging, or a change of sensations associated with outside conditions: hot and cold temperatures. A Sofres study (2) conducted in the early 1990s showed that 70% of the women surveyed said they had a sensitive skin, 47% that it was easily irritated, 43% that they had a reactive skin, and 50% said they had already experienced at least one of these manifestations: redness, stinging, heating sensation, itching. 69% of women said their skins badly reacted to at least two of these factors: cold temperatures, hard water, lack of cream, fatigue, and stress. These factors suggest skin sensitivity depends on the quality of the skin barrier, on the defence system against oxidative stress, on the skin nervous system, but also on the sebum. Experts consider that this incidence is the same in the US. A study of 3,000 women conducted by L’Oréal Research (3) and Doctor Wilkinson confirmed the concept of sensitive skin, showing that this typology does exist, and it is not just the result of a concept created by the industry. Still, the authors concluded that sensitive skins are not pathogenic skins, but rather a sort of “invisible dermatosis” related to cosmetics, not therapeutics. The manifestations are neurosensorial, and these skins make up a heterogeneous group with many degrees of reactivity. Then, the CERIES (4,5) conducted two studies: one among 319 women aged 20 to 50, the other among 255 women aged 20 to 70. The results matched up with the observations made as part of the previous studies.

This research work led to a suggested typology of sensitive skins.

In addition, several constitutional factors (6) favour the expression of these sensations:

This work helped set up a questionnaire to investigate the prevalence of the different types of sensitive skins. 10,000 women from the main world regions filled it in, and 50% of them answered they had a sensitive skin. Recent studies show a rise in the frequency of sensitive skins, which can be explained by the quick, multiple changes in the environmental conditions women are exposed to (air conditioning, fast transport between opposed climatic zones, climate disruption, pollution…).

The Stinging test (7): The use of this test helped make considerable progress in our understanding of this phenomenon. Developed in 1977 by Frosch and Klingman, it consists in applying a solution containing 10% lactic acid for 10 min on one side of the nose, and a saline solution on the other. The sensations are collected on a scale from 0 to 3. This test became an important tool in the approach to sensitive skins. It helped make progress, first by more specifically assessing the people concerned, but also by forming specific panels of subjects with these manifestations in order to conduct more accurate studies. It made it possible to test these approaches, either on pure ingredients or actives, or on finished products. Several variants of this test were described: the most common uses capsaicin instead of lactic acid as a triggering factor.

Then, research work on skin innervation improved our understanding. Long ignored, just because its existence had not been demonstrated, the NICS, Neuro-Immuno-Cutaneous System, became an issue of major interest. It was evidenced and characterized in the 1990s, which helped better understand the interactions between the different compartments and the intrinsic and extrinsic effectors in the skin. For example, it demonstrated the role of the pool of neuromediators in the skin, and of a few of them in particular.

All this gradually led to the characterization of sensitive skins as neurogenic skins with reduced thresholds of response to the environment, in which management involves regulating neuromediators and inflammation.

Based on these advances, the industry developed products targeting this skin category. A few brands chose products specifically formulated to avoid any irritation or aggression, thanks to ingredients characterized by their low irritant or allergenic potential, combined with moisturizing actives, or actives that rebuilt the skin barrier effect. Others provided a more symptomatology-based answer with specialties designed to correct the disorders observed, like inflammation, discreet vasodilatation, and/or stinging and heating sensations.

As for ingredient manufacturers, several of them started to offer specialties specifically formulated around this theme.

At Sederma, the answers were original and innovative. Two formulas were suggested: Sensicalmine and Dermocalmine. Sensicalmine is a hydroglycolic solution based on a specific peptide, N-Acetyl-tyrosyl-arginyl-hexadecylester. It was developed following studies that had demonstrated that this substance class offered a soothing effect on the skin by locally producing Metenkephalin. This neurotransmitter interferes with the transmission of pain through nerves to reduce the sensation it produces. Since additional research showed keratinocytes are likely to secrete this neuromediator, it became relevant to stimulate it. Pretty original tests had demonstrated an effect by nociception, i.e. the reduction of the effect of pain. As for Dermocalmine, it contains a leech extract lowly titrated in hirudin, whose anti-inflammatory, phlebotonic properties offer a curative treatment in case of congestion and erythema. The effect of this substance was specifically demonstrated on capillary permeability, one of the symptoms of these skins.

BASF, known as Laboratoires Sérobiologiques at the time, developed several specialties, including Anasansyl. Composed of a combination of mannitol, Ammonium Glycyrrhizate, caffeine, zinc gluconate, and a horse chestnut extract, this formula offered a soothing, softening effect in the targeted weakened skins, with a proven action on inflammation mediators (LDH, PGE2, IL-alpha).

As for Solabia, they devised a multiple approach sensitive skin involving several of their own specialties to address this issue.

As far as cosmetics brands are concerned, one of the suggestions once made consisted in setting up a new classification or typology of sensitive skins (8). Instead, what happened – as is always the case – is that brands developed plenty of specialties on their own to adapt to this positioning. Here are a few examples of the products offered. 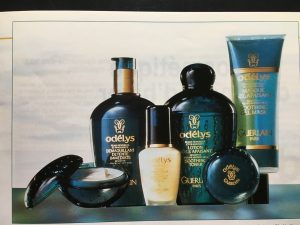 This product range was offered by Guerlain in 1993 to meet sensitive and weakened skins’ needs. It is a comprehensive solution comprising a makeup remover, a lotion, a mask, and three skincare products: Soin Idéal no. 1, a light cream for normal to combination skins, Soin Idéal no. 2, for dehydrated skins, and Soin Idéal no. 3, a very rich, W/O emulsion cream. These products feature an original active complex, Phytobium. Composed of botanical, mineral, marine, and organic elements, it created a favourable environment, thanks to liquorice and gingko biloba extracts, anti-free radical ingredients, vitamin E, vitamin A palmitate, tocopherol linoleate, organic hyaluronic acid, and a mineral sunscreen. The range also comprised a preparing serum to be used underneath the common products. Formulated to neutralize the reactivity of sensitive skins, it contained the Phytocomplex based on an Obaku extract derived from the bark of a Japanese bush, combined with a peach tree and lime leaf extract, an algae extract rich in trace elements, vitamin E, hyaluronic acid, and tocopherol linoleate. All these products also contained perfluorated oil whose film-forming power was used in an interesting way. These oils were forgotten for almost 20 years before they were used again in “oxygenating” products. Indeed, they have the advantage of dissolving oxygen – they were used in artificial blood, among others. Later, other products were added to the range: Soin Idéal Eye Contour, a soothing gel-mask, a moisturizing cream mask, and a massage sponge specifically developed to micro-exfoliate sensitive skins. Cosmétologie no. 9 – January/March 1996.

A cleansing milk, a soothing thermal mist, a cleansing cream to be rinsed off with water, and a regulating day cream made up this comprehensive range developed by Biotherm. Thermal plankton was contained in all its products, since its active was also derived from this plankton extract. Alcohol- and perfume-free, it got all the labels that started to appear on product packaging.

Since sensitive skins are fragile, often thin and dry, and subject to sensations of tightness, Vichy developed a five-product range to address this issue. Alginate was at the core of the strategy. Healing, soothing, moisturizing, anti-free radical plant-derived polymers were combined with calcium EDTA to reinforce the anti-free radical activity, as well as with shea butter and alpha-bisabolol.

Initially launched in 1996 with a single product, a cream, this range was quickly completed in 1999 with other products: a moisturizing fluid, an eye contour, and a night version of the cream based on a patented complex named Actical, initially made from a commercial active ingredient, N-acetyl-Arg-Tyr-Hexadecylester which has calming properties, reducing the reactivity of the skin, through the stimulation of POMC and the release of beta-endorphin and enkephalin and a substance P antagonist substance. Substance P is a neuromediator involved in certain skin manifestations. Combined with natural rose and peony extracts, this complex triggered a global effect against skin irritation related to internal and external aggressions. A barrier reinforcement effect was also offered.

Many other products focused on this theme emerged, but this claim gradually became transversal, based on the principle that “who can do more, can do less”. All products became more or less compatible with “sensitive skins”: the most serious brands introduced various tests, like stinging tests, and sometimes in-use tests on a specific panel to the series of qualification trials needed to get a marketing authorization. Other, more opportunistic brands were content with making the same claims as everyone. There would be quite a lot to say from an ethical standpoint!

That is it for this saga, which lasted over ten years and kept many people busy. Since then, areas of interest have evolved in line with fashions, but it would be a good idea not to forget that this cosmetic “complaint” remains a topical issue.

In collaboration with: Frédéric Morizot, Laurence Bacilieri, Gérard Bernard, Florent Pastore, Jean-Luc Ferry, and a few others I warmly thank.

If anyone would like to provide additional input and/or complete this work, they are most welcome. Feel free to contact me about it.