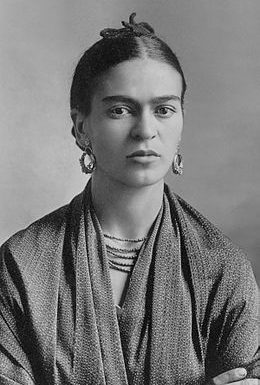 Magdalena Frida Carmen Kahlo Calderón, known as Frida Kahlo, was born on July 6, 1907 in a territorial demarcation of the present federative entity of Ciudad de México, and died on July 13, 1954 at the same place. She is a Mexican painter. Throughout her life, she has been in poor health, suffering from polio since the age of six, and then suffered a serious bus accident. She will have to undergo many surgeries. Frida became, during his lifetime, a symbol of Mexico abroad, because his artistic originality, based on specific and clearly identifiable elements of Mexican culture, corresponded to the affirmation of Mexican identity by the nationalism that s ‘is developed after the revolution of 1910. The new ticket of 500 Mexican pesos in circulation since August 30, 2010 is in his effigy and that of Diego Rivera. The Victoria and Albert Museum in London is devoting an exhibition called “Making her Self Up”. In an interesting article, Claire Wilcox, chief fashion curator, examines Frida Kahlo’s makeup collection. We discover some cosmetic products of her time.

The V&A is the world’s leading museum of art and design, housing a permanent collection of over 2.3 million objects that span over 5,000 years of human creativity. The Museum holds many of the UK’s national collections and houses some of the greatest resources for the study of architecture, furniture, fashion, textiles, photography, sculpture, painting, jewellery, glass, ceramics, book arts, Asian art and design, theatre and performance.